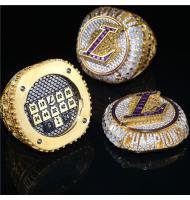 To recognize the 95 days the Lakers spent in the Orlando bubble, each of the 17 purple amethyst stones comprising the "L" on the ring's face weighs .95 carats -- and of course the 17 signifies the 17th championship in franchise history.

There are .52 carats of yellow diamonds in every ring, representing the 52 regular-season wins by the Lakers. The word "unity" is etched into every ring, a reference to the social justice movement that the entire NBA, not just the Lakers, took on as a cause. The phrase "Leave A Legacy" -- the Lakers' playoff slogan -- is also emblazoned in gold in LeBron James' handwriting on every ring.

Lakers legend Bryant, who died in a helicopter crash along with his daughter, Gianna, and seven others in January, has several tributes on the totem. There is a Black Mamba snake encircling every player's uniform number, and the ring has a first-of-its-kind detachable top that reveals another Bryant salute.

"This ring eclipses last year's NBA championship ring as the most valuable NBA championship ring in history with the most amount of diamond carat weight than any other ring in history," Arasheben said. "I mean, this ring, we really wanted to make a statement. It's been 10 years since the Lakers have won. We wanted to come out and really make a statement and really reward these players for a job well done."

The 2019–20 Los Angeles Lakers season was the franchise's 72nd season, its 71st season in the National Basketball Association (NBA), and its 60th in Los Angeles. The Lakers were coached by Frank Vogel in his 1st year as team head coach.

On January 26, 2020, Lakers legend and 5-time champion Kobe Bryant, along with his 13-year-old daughter Gianna, were killed in a helicopter crash; the team commemorated the Bryants several times during the remainder of the season, including on January 31, when the Lakers played their first game since Bryant's death. On March 6, the Lakers clinched their first playoff berth since the 2012–13 season. Five days later, due to the ongoing COVID-19 pandemic, the season was suspended. On July 5, the NBA announced a return of the season in the NBA Bubble, with 22 teams playing 8 seeding games followed by a full postseason. Play resumed on July 30, and on August 3, the Lakers clinched both the Pacific Division title since 2012 and the top seed in the Western Conference playoffs for the first time since the 2009–10 season.

In the 2020 NBA playoffs, the Lakers faced off against the eight seed Portland Trail Blazers in the first round and won the series in 5 games. In Western Conference semi-finals, they faced off against the fourth seed Houston Rockets, again winning in five games. They advanced to the Western Conference Finals for the first time since 2010, where they faced and defeated the Denver Nuggets in five games. They reached the NBA Finals for the first time in a decade, where they faced off the Eastern Conference champion Miami Heat, marking the first meeting between the two teams in the NBA Finals. The Lakers won the series in 6 games, winning the championship for the first time since the 2010 season. They became the first team since the 2007–08 Boston Celtics to go directly from a non-playoff season to a championship. This championship win also saw the Lakers tie the Celtics with the highest number of NBA championship wins at 17. The Lakers' LeBron James was named the NBA Finals Most Valuable Player (MVP) for the fourth time in his career. He became the first player in league history to be named Finals MVP with three different franchises (two with the Heat, one with the Cleveland Cavaliers and one with the Lakers) and the fourth player to win the NBA Finals with three different teams.[9] Lakers president Jeanie Buss became the first female controlling owner to guide her team to an NBA title.