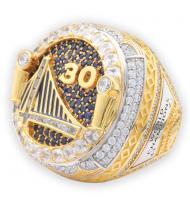 The basketball fans, get your hands on the best design golden state championship ring crafted with perfection to show your true love for the game.

RingofChampion is enthralled to showcase the incredible design range of the golden state championship rings. Built with the finest quality material, these varieties of rings look splendid on the finger.

We can customize the look of your ring as per your preferences likewise the material type (silver, copper, or yellow gold), detailed engraving of your name and number for making it more personalized. The precious stones are carefully embedded on the ring (not pasted) for giving an extra edge to the overall design.

Want to own it for your hand? Get it from us at a competitive price! We will deliver at your place in a luxury wooden gift box!

There are blue CZs on the top of this ring, you can choose to get the ring coming with white CZs, just simply leave a message when you made the purchase!

The 2017–18 Golden State Warriors season was the 72nd season of the franchise in the National Basketball Association (NBA), and its 56th in the San Francisco Bay Area. The Warriors entered the season as the defending NBA champions and repeated, sweeping the Cleveland Cavaliers 4–0 in the Finals. It was the first time in NBA history and in North America's four major professional sports leagues that two teams had met to compete for a Championship for a fourth consecutive year. It was the Warriors' third championship in four years, and sixth overall. Golden State won the Pacific Division title and Western Conference Championship for the fourth consecutive season. In the playoffs, the Warriors defeated the San Antonio Spurs in the First Round 4–1 and the New Orleans Pelicans 4–1 in the Semifinals. They beat the top-seeded Houston Rockets 4–3 in the Western Conference Finals.

The Warriors finished second in the Western Conference with a record of 58–24, their fifth most wins in franchise history. Golden State set the NBA record of 16 consecutive home wins in the playoffs, surpassing the 1990–91 Chicago Bulls. Stephen Curry set the NBA record for three-pointers made in an NBA Finals game with nine. Stephen Curry, Kevin Durant, Draymond Green, and Klay Thompson were all named to the All-Star Game, the first time in NBA history that a team has had four All-Stars in consecutive seasons, and just the ninth time in NBA history a single team has had four players in the game. Curry was named captain, being the leading vote getter from the Western Conference. The Warriors ended the regular season with a slew of injuries to all four of their All-Stars, including an MCL sprain for Curry that kept him out for six weeks, and lost ten of their last seventeen games. For the first time since the 2013–14 season, they did not clinch first place for home-court advantage for the playoffs and failed to win 60 games for the first time under Steve Kerr.

This season also marked David West's final season in the NBA. He retired on August 30, 2018. West won 2 NBA championships with the Warriors and following his retirement, left Chris Paul of the Houston Rockets and J.R. Smith of the Cleveland Cavaliers as the last remaining active players who played for the Oklahoma City Hornets.