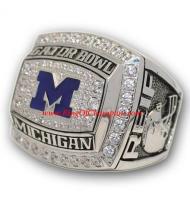 The 2010 Michigan Wolverines football team represented the University of Michigan in the 2010 NCAA Division I FBS football season. Michigan played its home games at Michigan Stadium in Ann Arbor, Michigan and competed in the Big Ten Conference. The season was the first since the renovation of Michigan Stadium, begun in 2007, was completed. The Wolverines were led by third-year head coach Rich Rodriguez. After its week 10 win against Illinois, Michigan became bowl eligible for the first time since 2007, and later accepted a bid to play in the Gator Bowl against Mississippi State on January 1, 2011, losing 52–14. The Wolverines finished the season sixth out of 120 Division I FBS teams in total offense, 110th in total defense and 112th in passing defense. Michigan finished with an overall record of 7–6, 3–5 in Big Ten play. After the season, head coach Rich Rodriguez and his staff were dismissed on January 5, 2011.

Jonas Mouton was the Big Ten's statistical champion in tackles, while Jordan Kovacs finished second. In conference games alone, Roy Roundtree led the conference in receiving yards per game, in part on the strength of a school single-game record 246-yard outing against Illinois. Reserve quarterback Tate Forcier also set a school single-game completion percentage record with a 12-for-12 performance against Bowling Green. The defense also set several records, including most points allowed and yards allowed.