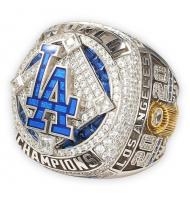 The 2020 Los Angeles Dodgers season was the 131st season for the franchise in Major League Baseball, and their 63rd season in Los Angeles, California. They played their home games at Dodger Stadium. The Dodgers went 43–17 during the COVID-19 shortened regular-season, and went on to win their first World Series championship since 1988 and seventh overall, defeating the Tampa Bay Rays in six games.

On March 12, 2020, MLB announced that because of the ongoing COVID-19 pandemic, the start of the regular season would be delayed by at least two weeks in addition to the remainder of spring training being cancelled.[1] Four days later, it was announced that the start of the season would be pushed back indefinitely due to the recommendation made by the Centers for Disease Control and Prevention (CDC) to restrict events of more than 50 people for eight weeks. On June 23, commissioner Rob Manfred unilaterally implemented a 60-game season. Players reported to training camps on July 1 in order to resume spring training and prepare for a July 23 Opening Day.

The 2020 Dodgers started the season 30–10, matching the best 40-game start in franchise history. The last such Dodgers start came in 1977, along with the Brooklyn teams in 1888 and 1955. This was also the best 40-game start in the majors since the 116-win Mariners began 31–9 in 2001.[4] The Dodgers led MLB in runs scored (349), home runs (118) and slugging percentage (.483, tied with the Atlanta Braves). The Dodgers finished the regular season 43–17, winning their eighth straight division title, and swept both the Milwaukee Brewers in the 2020 National League Wild Card Series and the San Diego Padres in the 2020 National League Division Series. They then defeated the Braves in the 2020 National League Championship Series to advance to the 2020 World Series against the Tampa Bay Rays, their third World Series appearance in the last four years and their 24th pennant in franchise history, surpassing the San Francisco Giants for the most in the National League. The Dodgers would then go on to defeat the Rays in six games, winning their first World Series since 1988, their sixth since moving to Los Angeles, and the seventh in franchise history.

Despite the shortened season, the 2020 Dodgers were considered one of the best teams of the modern era. The team's regular season .717 winning percentage is the highest of the post-1960 expansion era. Had the team finished a 162-game season at the same pace, they would have tied the 2001 Seattle Mariners and the 1906 Chicago Cubs with a record 116 wins