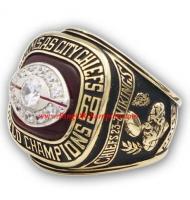 The 1969 Kansas City Chiefs season resulted in an 11–3 record and a 23–7 victory in Super Bowl IV over the heavily favored Minnesota Vikings. The team beat their rivals, the Oakland Raiders in the final Championship Game, claiming their third Championship in franchise history. The Chiefs were coached by Hank Stram, led by quarterback Len Dawson and a powerful defense led by Bobby Bell, Willie "Contact" Lanier, Buck Buchanan and Curley Culp. The Chiefs' defense became the fourth defense in the history of pro football to lead its league in fewest rushing yards, fewest passing yards and fewest total yards. The Chiefs were the second team to win the Super Bowl and last team to do so before the Merger in the following season.

The season was marred not only by an injury to quarterback Len Dawson but also controversy surrounding Dawson and his purported involvement in a sports gambling ring. Back-up quarterback Mike Livingston and the Chiefs' stellar defense led the Chiefs back to the Super Bowl, this time, to win it all.

In 2006, the 1969 Kansas City Chiefs were ranked as the 18th greatest Super Bowl champions on the NFL Network's documentary America's Game: The Super Bowl Champions.

In 2007, ESPN.com ranked the 1969 Chiefs as the seventh-greatest defense in history, noting "Hank Stram's 'Triple Stack' defense, which gave the linebackers lots of room to roam, was superb, holding five opponents to fewer than 10 points and giving up an average of less than two touchdowns a game.... Then they got serious. Against the [defending] Super Bowl champion Jets in the divisional playoff game at Shea Stadium, the Chiefs held on for a 13–6 victory, thanks to a remarkable three-play goal line stand that stifled the Jets on the one. After losing twice to the Raiders during the regular season, the Chiefs allowed a single touchdown, in the first quarter, to win the title over Oakland 17–7. The Chiefs defense then stifled the Vikings in the Super Bowl, allowing only two rushing first downs and picking off three passes in the fourth quarter to win 23–7. Total points against the Chiefs in the playoffs: 20."