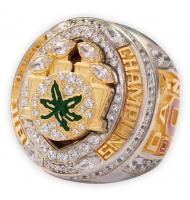 the 2020 Ohio State Buckeyes football team represented Ohio State University in the 2020 NCAA Division I FBS football season. They were led by second-year head coach Ryan Day, and played their home games at Ohio Stadium in Columbus, Ohio. It was the Buckeyes' 131st season overall and 108th as a member of the Big Ten Conference.

The season was played amidst the ongoing COVID-19 pandemic. The Big Ten Conference initially cancelled the fall sports season, on August 11, 2020, but reversed course on September 16, announcing an eight game conference-only schedule。 Ohio State's nonconference games against Bowling Green, Oregon, and Buffalo were cancelled. Precautions were taken to promote player, staff, and fan safety, including regular COVID-19 testing, isolation requirements, and mask wearing; games were largely played with no or few fans in attendance.

Ohio State began the season ranked second in the preseason AP Poll. In the regular season, the team secured victories against ranked opponents Penn State and Indiana, but had games canceled, due to COVID-19 outbreaks, against Maryland, Illinois and Michigan. Big Ten Conference rules established before the season specified that teams would need to complete at least six conference games in order to be eligible for the conference championship game. After Ohio State's game against Michigan was canceled, and Ohio State having only completed five games, the conference voted to change these rules and allow the undefeated Ohio State team to represent the East Division. The conference cited the fact that Ohio State would have won the division with either a win or loss against Michigan. In the conference title game, Ohio State defeated West Division champion Northwestern, 22–10, winning their fourth consecutive Big Ten title. In the final College Football Playoff rankings of the season, Ohio State was ranked third, earning them a place in the national semi-final game to be played at the Sugar Bowl against second-seeded Clemson. In that game, a rematch of the previous season's semifinal, Ohio State won by a score of 49–28. The team advanced to the CFP National Championship against top-seeded Alabama, who had advanced by winning the Rose Bowl. The Buckeyes lost, 52–24.