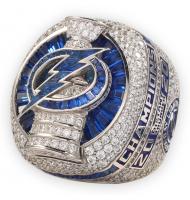 Weight: This is a very huge ring, weight about 95 grams in copper!

The 2019–2020 Tampa Bay Lightning season was the 28th season for the National Hockey League (NHL) franchise that was established on December 16, 1991. The Lightning entered the season as the defending Atlantic Division and Presidents' Trophy champions.

The season was suspended by the league officials on March 12, 2020, after several other professional and collegiate sports organizations followed suit as a result of the COVID-19 pandemic. On May 26, the NHL regular season was officially declared over with the remaining games being cancelled. On July 10, following the extension of the NHL Collective Bargaining Agreement by the league and the Players' Association, it was announced that the Canadian cities of Toronto and Edmonton would be the locations the 2020 Stanley Cup playoffs would be staged in. The conclusion of the playoffs would be held in Edmonton as the site of both conference finals and the Stanley Cup Finals.

The playoffs began on August 1 in a modified format involving 24 teams. The Lightning began in Toronto with the other Eastern Conference teams and were given a bye into the first round by virtue of having the second-highest point percentage in the Eastern Conference at the time of the pause. For seeding, they competed in a four-team single round-robin along with the Boston Bruins, Washington Capitals, and Philadelphia Flyers, in which they finished in second place. The Lightning then defeated the Columbus Blue Jackets in the first round in five games, and the Boston Bruins in the second round, also in five games. Shifting to Edmonton, they competed in their fourth Eastern Conference Finals in the past six seasons, defeating the New York Islanders in six games.

On August 27, the playoffs were briefly suspended as the remaining teams decided not to play their next scheduled contests in the wake of the shooting of Jacob Blake.